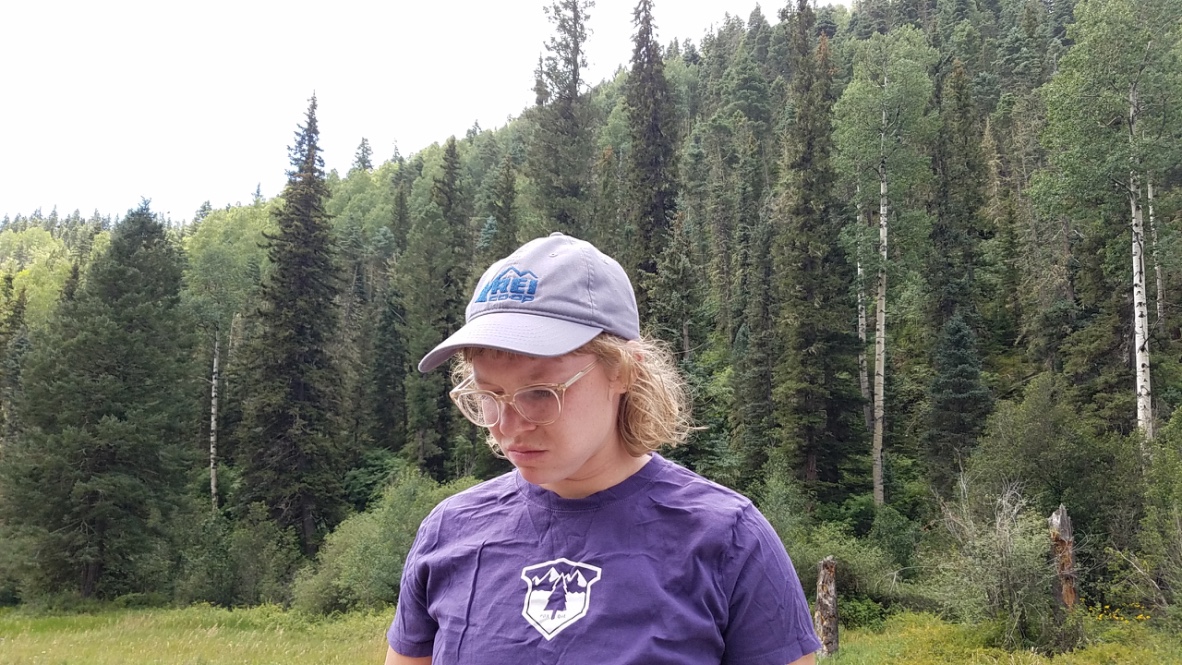 She considers herself to be thoughtful because she is constantly thinking a lot. She is always analyzing the world around her. For this reason, she is more reserved than many people and doesn’t talk much. When she does speak up, what she says is meaningful.

This is Olivia Comstock, a National Student Exchange student from the University of Idaho.

Olivia was born in Arizona, but has spent most of her life in the city of Boise, the capital of Idaho. Before entering this student exchange, Olivia says she had never been to New Mexico before. With no family at all here, Olivia has placed herself in an entirely new environment. Why did she do it?

She wanted to be a part of Scribendi’s staff.

“I was interested in reading and looking at different people’s work because I find that to be interesting.” Olivia explains on what being on the staff meant to her. She says she wanted to learn how to do practical things and learn how to make something. This kind of experience is different than other classes, she says, because you aren’t just learning something out of a textbook. “It is a great opportunity.”

Olivia became really interested in being apart of Scribendi when two of her art pieces were published in the 2016 edition of the magazine. What was published were two pieces of sculpture that were both created during her years of ceramics and sculpture back in high school and the beginning of her college years. She did not know that the University of New Mexico was the school that Scribendi was a part of until she got an email about joining the staff. A junior now, she is majoring in Philosophy and doesn’t really do stuff with ceramics anymore.

Still, she loves that her work was published. “It was awesome to see my work published and in print.” She describes.

According to Olivia, Boise is a smaller city than Albuquerque, but not much. The climate is similar between the two cities with dry, hot summers, and dry winters. On the other hand, in the town where Olivia goes to school, Moscow, the climate is very different from Albuquerque. There, days are rainy and colder than here.

Because the citizens are surrounded by mountains, it seems to Olivia that people in Boise are more outdoorsy than people in Albuquerque. Idaho is also a small state, so there are many small communities all around. The city of Albuquerque itself is big enough to have different sections of the city, and Olivia describes traveling through the city as traveling to different cities.

While Olivia enjoys the diversity of people at the University of New Mexico and the opportunity to take a large range of classes, it is this that makes her miss home more. “I miss the small-town community feel that no matter where you go, you know people.”, Olivia states. She also misses the feeling of safety and security she had back home. She says she doesn’t feel safe at night in Albuquerque; free to go wherever she wants.

The biggest thing that keeps Olivia strong in face of this huge change, is the fact that her partner is making the journey alongside her. Together, they are living in the old Albuquerque High school building. She finds it comforting to not be alone in a new place.

Being on the staff has exceeded Olivia’s expectations. There is more volunteering and fundraising involved in the process that the was not expecting. However, the experience so far has been rewarding for her. She has found that being around honors students, no matter where, is great because they are focused anywhere you go.

Olivia’s exchange is for the full academic year, so she will be on staff through the entire process of making the 2018 edition of Scribendi. We all look forward to hearing more of her insight, her intelligence, and her analyses.