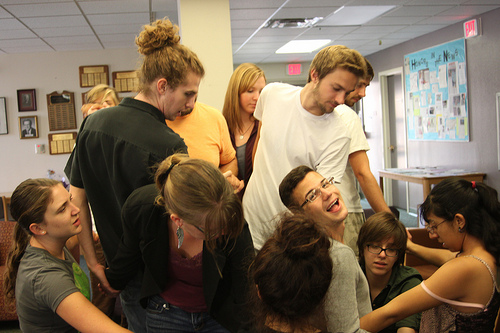 by Sergio Carrasco and Jesse Montoya

Less-than-credible news sources suggest that on Saturday, August 24th, the Scribendi team gathered in the early morning hours for their annual Teambuilding Workshop. Participants arrived groggy, nervous, and generally withdrawn. A sort of quiet unease shrouded the honors forum; some staff members made small talk, others quietly awaited their fate. An ambassador from the far reaches of the UNM Human Resources department, Danielle Gilliam, consorted with Professor Amaris Ketcham in hushed tones.

Right about now you may be wondering: “Just what went on at this alleged Teambuilding Workshop? What sort of shady goings-on might follow when Scribendi members are granted the use of school property to conduct their extra-curricular activities?” So I say to you—don’t worry about it. Don’t imagine being trapped in a room with some of the most brilliant, talented, silly and generally awesome people UNM has to offer. Erase such inclinations from your realm of consciousness. It never happened. What evidence have you, anyway, that the Scribendi staff members threw Beanie Babies at one another? Or walked around the honors forum balancing fruits atop their heads? Or played a frivolous game of Telepictionary, sitting crosslegged on the floor like children, doodling all willy-nilly, making wild and totally inconsequential guesses? What proof can you present indicting the Scribendi staff of playing such powerful, illicit games with the potential to forever change a person’s outlook on communication theory? That’s right—none. Really, can’t you see how silly you sound right now?

So in the interest of setting the record straight and clearing our good name, I’m here to dispel any rumors you may have heard. I’ll start with the most nefarious of them. Many are wondering if we did in fact play the human knot game, wherein humans are asked to untangle a knot of their own creation through effective communication and decision-making. I cannot—in the interest of self-preservation—comment on the veracity of such statements, but must insist that if we ever did play such a game, we would likely beat it in record time. This is not an admission of guilt, I might add, but a mere musing on my own part. For when I look upon the members of the 2014 Scribendi staff, they seem to be so adept at untangling knots that they could probably just as easily do it behind their backs if necessary.

Many reports of that day have also alleged that certain members of the Scribendi staff consented to a form of psychological torture wherein they allowed a peer to place an Oreo cookie upon their forehead and—by sheer force of will and determination—transport the cookie from their forehead to their mouth. It has even been suggested that team members were often more than willing to use a cookie which had fallen on the floor multiple times as the instrument of their own psychological undoing. Reports tell of phrases readily issued from spectators such as “Just twitch your face a little bit” and “See if you can wrangle it in with your tongue.” An investigation is already underway regarding the roles played by Amaris Ketcham and Danielle Gilliam, the alleged architects behind the deleterious activities that I assure you did not occur.

Blot from your mind any thoughts of the twenty-fourth of August. The powers that be have tried to convince you to take note of this day, to imbue it with some meaning. “A Day to Remember,” they have printed in newspapers run for and by their corporate conglomerates. But I must caution: Be wary of what you read. Be wary of the reporter who distorts the truth in service of his house’s agenda. The Scribendi Teambuilding Workshop didn’t happen. Just like we didn’t land on the moon, and Area 51 doesn’t exist…that’s right. In fact, nothing out of the ordinary took place that day, or the next, or the next. You woke up, put on some fuzzy socks, bumped a little Billy Joel while you did some light cleaning, and then spent the afternoon looking at GIFs of cats…furry, furry cats.