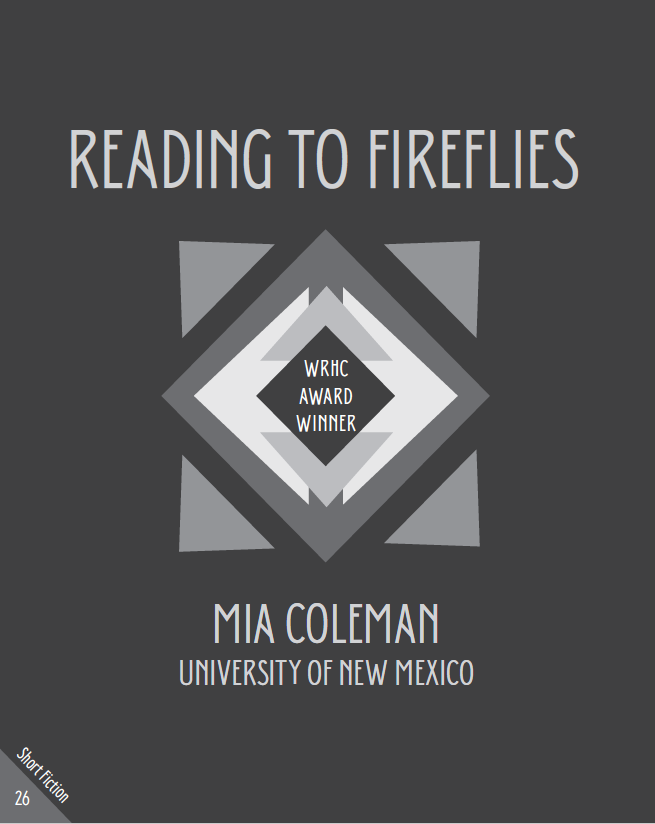 Mia Coleman, a UNM sophomore, is the author of the WRHC award-winning fiction piece “Reading to Fireflies.” This story takes a look into the mind of a young girl contemplating her small world and the biggest figure in it—her mother. In the process, she discovers a darker side to her mother. With her distinctive characterization and voice, Mia creates a potent and memorable atmosphere. Mia was kind enough to answer some questions about this absorbing piece.

Q: One of the most memorable things about this story is the vivid narrator’s voice. Why did you choose to write from a young child’s perspective?

A: I have always been fascinated with writing stories from a child’s perspective, partially because children are much more perceptive and intuitive than they are often given credit for. However, there’s also an interesting disconnect between a child’s reality and an adult’s reality, especially concerning more “adult” topics—like sexuality, mental illness, implications of poverty, and religion. I chose to write from a child’s perspective partly for this reason. The second half of that reason is that her voice was very clear in my head before I wrote the story down, and I wanted to stay true to that voice. I followed my intuition about where she was in her narrative arc. I suppose I could have written the story from her adult self looking back, but I did not want to lose that sense of childhood wonder, curiosity, and fear of being dependent on an unpredictable mother. If I told the story from an adult perspective, it would have been an entirely different narrative.

Q: The fact that the narrator is biracial is only subtly mentioned but still plays an interesting role in the story. Was there a certain reason that you made racial difference a part of the story? What is its significance?

A: Hallie is biracial because that is how she presented herself to me. It is rare, but lucky, when characters seem to form themselves and do not need to be consciously assigned a gender, race, or voice. The particulars of her character were strong while I was writing the story, and I did not question the fact she was biracial. She simply was.

Another racial component of the story is strongly tied to her mother, in her whiteness, which is similar to the inside of a water moccasin’s mouth (a “cottonmouth” snake). I wanted to draw racial implications between the mother and the snake to foreshadow her toxicity, and to touch on the Biblical implications of snakes and fruit, such as the watermelon mama always brought home. Hallie is also biracial because, while her mother loves her, there are subtle misunderstandings between them—such as mama pretending Hallie has straight hair, when her hair is very curly. This disconnect continues to grow as Hallie does not understand her mother’s “Night Days,” her profession, or mama’s episode of speaking to Hallie’s dead father.

Q: The shifting tense is interesting—the story begins by suggesting that it is retrospective (“My mama used to…”) but by the end, the narration is in present tense. What was your thought process with this decision?

A: Good question. I have dozens of drafts of this story, many of which play around with tense. For a while I placed everything in present tense because I thought it was strange to have shifting tenses in such a short story. However, when the story was written entirely in present tense, it lost all of its originality. Also, in present tense, the intentional grammatical errors (Hallie’s fragments, run-on sentences, and misuse of words), looked very unintentional. Her way of speaking and thinking was completely lost in the beginning of the story. Likewise, written in all past-tense, the ending of the story lost its interest. It needs the immediacy and fear of present tense to convey Hallie’s confusion over her mother’s mental break. So, in the end, I reverted to the tense structure of my very first draft of retrospective shifting into present tense to cater to the needs of the two halves of the story.

Q: Was this story a departure for you in voice/theme/other aspects, or do you usually write stories with this type of distinctive voice, setting, etc.?

A: I have never written a story with this type of narrative voice: a young, biracial girl living in an impoverished region of Georgia with little access of education. However, I love Hallie and writing in her voice, because she came with so much life in her. A lot of times it is hard to find characters like her, and it takes much more “digging” to find out who they really are.

I have written from the perspective of children, adult men and women, individuals that are gay, and from a range of ages, different countries, professions, and individuals close to death. When I began writing this story, I had no intention of anyone every reading it—so I played and experimented, partly by breaking grammar rules and with Hallie’s voice. I spent quite a bit of time picturing the structure of the story, and how I wanted different symbols, descriptions, colors, and dialogues to interlink with each other and carry dual meanings. I did that type of symbolic “planning” much more with this story than I have with others.

I try to make every story I write somewhat of a “departure” from the other ones I’ve written, because I find it essential to push myself creatively. Creativity gets lost in formulaic writing, I believe, and my main goal is simply to keep learning how to tell stories better. Characters, if you listen to them well enough, always have their own distinctive voices. It’s a matter of being quiet and patient enough to let them express themselves that makes a story “distinctive.”

Q: Where do you see the narrator after the events in this story?

A: That is for you to decide!

The main concern for me about Hallie was getting to the bottom of her internal conflict and what she really wanted, which was to feel safe and to be loved. Since she figured that out, where she goes physically in the world after the story is of less importance to me. Perhaps one day I’ll write more stories about her, but until then, just know that she will be alright.

Q: Who or what have been some of your literary influences, particularly with this story?

A: This is a funky quirk of mine, but it’s how I have to write—when I am actively writing a story or a long work of fiction, I do not read a lot material from one author. I have found that reading one author, Fitzgerald, let’s say, while I’m writing over-influences what I’m working on. It works best if I read material outside of my genre if I’m writing at that time. In general, some of my biggest literary influences have been F. Scott Fitzgerald (I feel that is probably a common one among writers), Walt Whitman, Mary Oliver, Sue Monk Kidd, and Carson McCullers. I am most drawn to works that are almost entirely character-driven as opposed to plot-driven, or that deal in smaller, poetic details.

My other literary influences are “real life” people and my surroundings. Everyday, I jot down “character notes” about people I have seen or talked to, and particular images I experience throughout the day. Those are the most helpful influences, because they are authentic. For example, in “Reading to Fireflies,” the fish spine in the watermelon once existed in my kitchen trash.