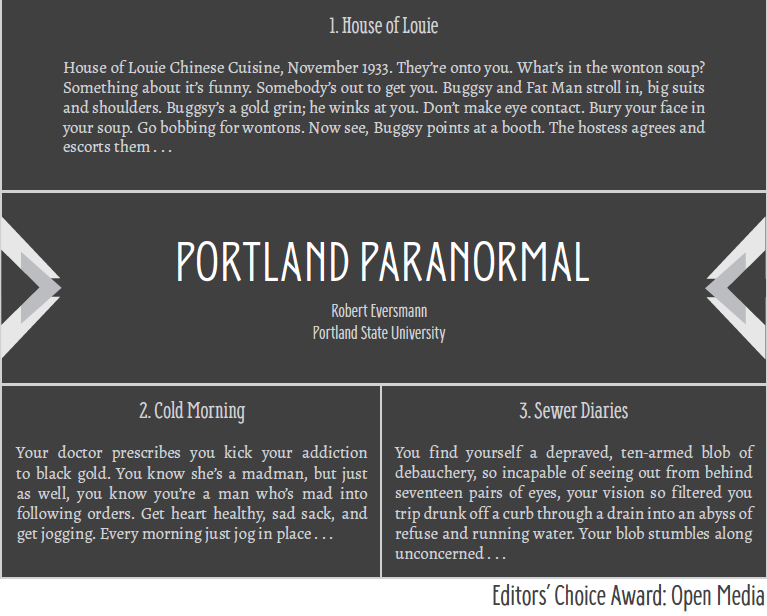 When did you start writing, ever think of making a career out of it?

So this radio drama, have you been doing this for a long time? Is this a project? And please tell me this is your own voice, because that would be amazing.

The Portland Paranormal started in fall the same year at KPSU, PSU’s college radio. I ran the radio show with my collaborator Alex Edmonds and we’ve since taken a break with the radio aspect to focus on film (we’re in post-production for our first right now!), very similar in structure to the shorts I sent you. Anyway, The Portland Paranormal started as a series and we added the shorts a little while after. The main show is about two paranormal investigators in Portland, OR named Robert Ogden (me) and Tyr Vitikar (Alex) and all sorts of cops, concerned citizens, ghosts, baristas… We played most of the characters and had a few guest stars. So yeeeeaah! But the shorts I sent are all me: from writing to voice to editing. I think I wrote like eighty or so of them, but I’ve only recorded a few so far, so more to come.

Uhhh, the ~fuu~uturre~ ??? Good question. I am working on a novel version of the series, as an experiment in visualizing a world through dialogue and sound tags. The reader can read the book on her own or with friends—all the different characters and someone makes live sound effects. So its radio-drama idea will kind of continue if people find they can have some fun with it. And I bet we’ll start recording new episodes and shorts down the road.

I would like to work a job writing. Mostly I make money landscaping. Writing comics though would be pretty dope. That or cartoons or regular old TV. I’ve been writing a soap opera. So anything serial and lazy would be pretty cool.

Just for fun: What is the weirdest/nerdiest hobby you have? Favorite books or movies?

Shoot, nerdiest hobby?… Uhh, I made honey bear shrines for a while and left them around town. I was stealing butterfingers for a long time to make a time capsule I buried underground (it was only butterfingers). I just bought 500 Yu-gi-oh cards (they go for reeeeal cheap)… Haven’t played forever but the best friend got broke up with yesterday so yeah we gon’ play it. Uhh, I pretty much write eight ten hours a day most days or dig holes in peoples’ back yards. I play in a bad band but it’s just to drink beer. I watch lot’s movies!! Not a lot of hobbies though I guess.

Ooh favorites though, movies: Hard Boiled, Days of Being Wild, Speed Racer, High and Low, Breathless (both Godard’s and Ik-Joon’s), Lola, Hidden Fortress, Winter Light, Persona, Fanny and Alexander, uhhh, Mulholland Drive, My Son My Son What Have Ye Done?, Stroszek, Aguirre the Wrath of God, there’s just too many good movies. Books, I love Correction, Moby Dick, Don Quixote, Infinite Jest, Jesus’ Son, I should probably stop there though, sorry for all the info…

Is there anything you are just dying to let us know? Literally anything.

Uhh, dying? I live at composition gallery (http://www.compositioncomposition.com/) with my partner Kayleigh Nelson (her website:http://www.kayleighnelson.com/ my website: roberteversmann.tumblr.com/) and our cat (also named Robert). We’re starting a press called cute sister (no website yet…).