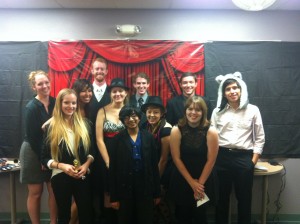 On the afternoon of Friday the 27th of September, the Scribendi staff started to prepare for Homecoming. First-timer and seasoned pro alike, they all pitched in to make this Homecoming the best one in Honors history. Did they pull it off? Absolutely. Then again, I may be biased. I was one of the staff members who sacrificed an evening of staying in and watching a movie while curled up in blankets with some hot soup (yes, we staff members do know how to live the life). So I’ll let you decide. Did the staff members achieve their goal? Was Homecoming the night that will be talked about for years to come? Stick with me as I present to you my case.

As with all long days, the work began the night before. By “work” I mean surviving through the anticipation. That’s work, right? On Homecoming day, the work began in earnest. Starting at noon, staff ironed designs on the new t-shirts, placed decorations, and realized that being above 5’10” is helpful when hanging streamers. Of course, as with any event, there was no way all of this would get done without mishaps. Shirt designs were ironed on using ironing boards only to discover that this was specifically warned against in the instructions (but who doesn’t like living on the edge?). Decorative candles were placed near flammable auction items, but were moved later to avoid burning down the Honors building. Several staff members were lectured on the fact that arson isn’t an appropriate method for heating the forum. One of our taller staff members, after swearing that he had excellent balance, nearly toppled off of a chair while decorating the forum (he insists that it was the chair’s fault). But of course much of this is speculation and exaggeration and certainly could not be corroborated by eyewitness reports. Trust us.

Staff gathered at 5:00 pm, dressed in their best, and Homecoming 2013 began. Professors and alumni alike posed for pictures at the photo backdrop as they filed in. Delicious food was served as more guests began to fill the forum. Most staff mingled and lounged around, content with the fact that they had pulled it off. The day of setting decorations, moving furniture and preparing auction items had come to fruition. On display for the silent auction was a respectable variety of goods from local businesses and artists who support Scribendi. But our auction couldn’t have succeeded without the generosity of professors, alumni and students. At the end of the day, Scribendi had produced about half the necessary funding for the year! And, on top of that, Homecoming was pulled off (mostly) without a hitch!

But all stories have their complications. There was witchery about as the guests left for home and staff began to clean up. Upon resetting the furniture, it was discovered that an entire couch had disappeared! Staff were dumbfounded and doubled-over with laughter. An immediate search party was sent out for the missing couch, but alas, it was not until days later that the couch was discovered safe and sound. The couch was given a stern lecture about not staying out past curfew and it sheepishly resumed its place in the Honors forum. If you happen by the couches, make sure to let them know that their penchant for sneaking out at night is no secret. Aside from the antics of our beloved couches, cleanup of the Honors forum was fast, efficient and, as always, filled with laughter.

The staff would like to thank all the alumni, faculty and students for making Homecoming 2013 one of the best yet. With their support, dedication and generosity, Homecoming was a grand success.