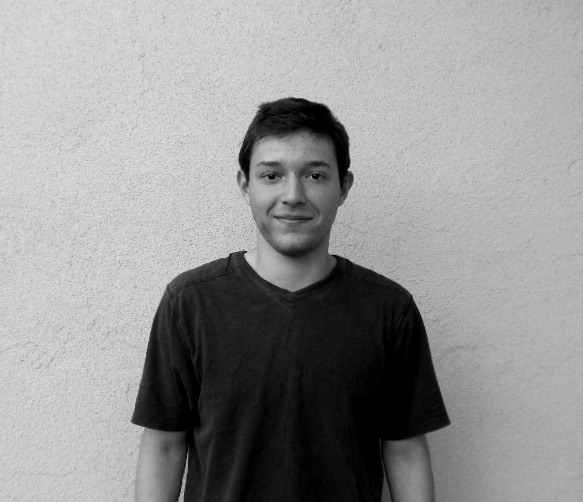 Near the turn of the twenty-first century, two children play in a dirt lot just past an impressive green hedge. Opposite the hedge and past the children lies a thin stretch of I-25 that rockets out of Albuquerque, New Mexico’s “Big I” like a sprinting sidewinder. The children mostly ignore the background, the peaceful hedge and the roaring freeway, but their games embody both aspects of the boundaries they pass by. The games they play are Imagination games—games where fiction and creativity are the only rules. They laugh, and chase each other, and sometimes sit and quietly talk. Both are totally engrossed, and both would soon split off on two totally different paths in life.

In fall of the year 2014, Jesse assumed the role of Editor in Chief of Scribendi. He had a mission: he wanted to repeat the 2014 edition’s success with none of its safe design choices. Jesse had always loved creative writing, and he felt that it deserved a creative presentation. His academic background, which he had begun to direct towards law school, spoke to his desire to play with rules and ideas and his unabashedness in doing so—and it was his goal that the staff should feel unafraid to do the same.I began my journey with Scribendi in fall of 2016.

As I sat in our classroom on the first day of class, I twiddled my thumbs, made idle, awkward conversation with my new classmates, and tried not to think about Amaris Ketcham’s —our faculty sponsor’s—famously imposing expression. I had come in with no real notion of what I had to look forward to, only a vague sense of apprehension; and, as I sat in front of my rectangular desk, I began to wonder if I shouldn’t reconsider this course. Then Professor Ketcham entered the room. Everyone perked up in their seats. There was no turning back now.

As a member of the Scribendi 2014 edition’s staff, Jesse earned the unfortunate moniker “Jesse the Oppressor” for his incredibly focused, detail oriented, and particular approach to his work. He had always held some trepidation at that nickname, and it caused him to worry over whether the staff was aware of his actually quite congenial personality. He would eventually lose that nickname as the staff came to know him better. He left none of his drive for quality, professional work behind, however.

In retrospect, I feel that I passed through September 2016 in a blur of work-induced hypertension. At the time, however, I felt as though I was trudging through molasses. There was always something more to do! My initial intimidation long forgotten, I began to send Professor Ketcham a prodigious amount of questions. We had just learned the basics of design, and we had our first major fundraiser coming up on October 1. I found myself wishing I could push the silent auction back by even one more week, but it was on the horizon, no question.

Come spring of 2013, Jesse Montoya sat in an office covered in small works of visual art and books. Across from him sat an Honors professor with one of the best poker faces Jesse had ever seen. That professor, Amaris Ketcham, began to ask him questions one after the other, all about his desire to serve on the staff of Scribendi. The further the interview went—the more Jesse grew concerned. His responses were clear. His qualifications were obvious. Professor Ketcham’s face stayed carefully neutral. Years later, Jesse would say: “You know how in an interview you can sor— sort of tell when, like, something’s there—for lack of a better descriptor? I wasn’t sure that, uh… she was a fan.”

After ASUNM’s defunding of Scribendi, under the premise that Scribendi was not truly a student organization, the editors of the 2016 edition worked tirelessly to have Scribendi’s student organization status reinstated. However, ASUNM agreed to give Scribendi less than a sixteenth of its former contribution. So, on October first, 2016, we held our first major fundraiser of the year: the Scribendi silent auction. I had worked on the project for some time; I had talked to local businesses and asked for donations, worked on a list of items, and helped prepare our decorations. But I still didn’t feel ready. I didn’t really think I had done enough. Only after the auction started and I sat manning the table did I begin to relax and think that maybe it all wasn’t so intimidating after all.

The designers of the Scribendi 2015 edition sat down during winter break of 2014 and began to plan. Jesse knew that something needed to change from the last year’s edition, knew that he didn’t want to stay safe just for the sake of attaining another Pacemaker award. He intended to leave at least that much of a mark, if he could. And so they put pencil to paper. A design began to emerge, and a pattern of glyphs and grayscale bars that came together to form organic bodies and flowers became the foundation of a magazine. Jesse’s hard work, and his long history of creativity, were beginning to pay off.

I sat at the desk and sold t-shirts. Customers came by. Some talked, and some bought t-shirts, some even bid on items in the auction. I almost passed the face of my childhood friend by in the crowd. The features were different, more businesslike, and less indistinct. But it was him: Jesse Montoya. I hadn’t seen him since his brother Matthew and my brother Nathaniel had played together as children and I went along on those visits. We struck up a conversation, a simple “hello and how are you” sort of interchange—nothing worthy of note to the layman viewer. I felt, however, that a connection I had lost a long time ago had been renewed.

I do not remember much of my childhood. But what I do remember of it is connected through threads of unique smells, tastes, images, and other triggers. Seeing Jesse brought back memories of what childhood meant to me: a free space where I could play, imagine, and invent at will cordoned by a healthy sense of realistic urgency. Oddly appropriate that the venue of that chance reunion happened to be one related to Scribendi, the literary magazine, where writers take their opportunity to recapture some of that creative spirit and a magazine staff do their best to present that work professionally.

In that way, Scribendi really is a meeting of minds. It reminds me much of the dirt lot where Jesse and I used to play while our brothers played video games inside Jesse’s house. On one side was the hedge—wild and green—and on the other the freeway—the professional, humming lifeblood of New Mexico. In the room for the silent auction, my conversation with Jesse mirrored the same structure. On one side lay the reception, where laughter mixed with food and greetings, and on the other lay the silent auction, where people quietly surveyed potential prizes with an eye to timing and strategy. In the middle, Jesse and I caught up about our lives.

While I had gone on to study theatre, and gain structure in the workings of theatrical pedagogy, Jesse had begun to study law. His practice, regimented though it was, now began to allow him to gain the play and flexibility he required to work the job he has an eye to this summer: a position in a judge’s chambers in the federal district court. We finished speaking soon enough, and Jesse wandered on to inspect the items in the auction. But I felt glad to have seen him after so long. What a coincidence, that I had met him through Scribendi. I guess our paths in life must not have been so different after all.